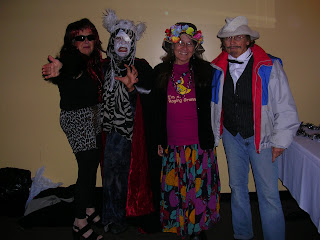 Thank You Greenfield and beyond for coming out to support WMCB and GCTV at our 2nd Annual Masquerade Ball on Saturday October 30th. It was a great time had by all!

Over 100 ghouls, goblins and freaks danced the night away to the amazing music of The Zydeco Connection and The Equalites.

Thanks to everyone who came out in support to volunteer and join in the festivities. See you next year!!
Posted by WMCB LPFM at 11:16 AM No comments:

Greetings Greenfield and beyond. It's that time again; time for WMCB and GCTV to put on their annual Masquerade Ball! If you're looking for some fun this ghoulish season, come one come all to this exciting event. You are sure to witness some of Franklin County's most freakish ghouls, LIVE and drinking! 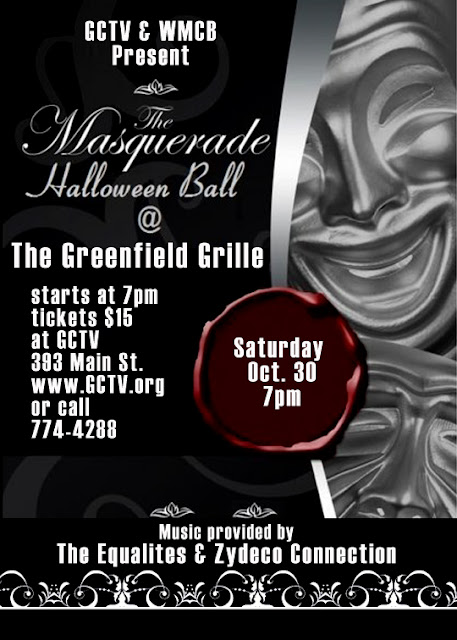 Building on the success of last year’s event the party has been extended and, with two live bands performing, promises to be even better than last year!  This not-to-be-missed evening will begin at 7PM with dancing to Zydeco Connection.  Later on The Equalites will take over the music, playing their reggae beats until Midnight, so that partygoers can continue to dance the night away.  Throughout the evening, prizes will be awarded for the best costumes.  In addition, attendees will have the opportunity to donate to GCTV and WMCB.

GCTV’s Station Manager, Scott MacPherson, is “looking forward to giving the community an opportunity to do something fun and raising a little money in the process”.  MacPherson also pointed out that The Greenfield Grille’s centralized location, at 30 Federal Street in downtown Greenfield, makes getting to the party a breeze.  “This is a chance for people to dress up as someone---or something---else, dance, drink, and generally have a great time”, said Garry Longe President of GCTV’s Board of Directors.

Only 100 tickets will be sold, at $15 each, to this exclusive event.  Purchase your tickets in advance at GCTV, 393 Main Street, 3rd Floor, Greenfield, Massachusetts, Monday through Thursday from 10AM to 8PM and Friday from 10AM to 6PM.  Cash or Check only.  Tickets are also available at World Eye Bookshop and The Greenfield Grille.
Posted by WMCB LPFM at 11:43 AM No comments:

Next Show: History of Bob Marley and the Wailers 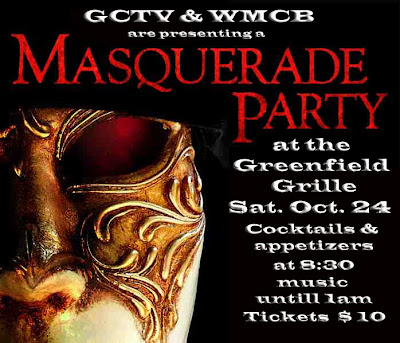 GCTV/WMCB are presenting a masquerade ball on Saturday night October 24th at the Greenfield Grille. Tickets are pre-sold and available at the station for 10 dollars. Only 120 tickets will be sold. Cocktail hour is 8:30 to 9:30 with appetizers and a cash bar. The dance floor will start grooving around 10. More details will be given as the event grows nearer. Please put it on your calendar and be sure to talk with Sean Griffin if you wish to volunteer in some way.
We will have a booth set up with information packets etc. about the station. We are looking for prizes to be given away for best costume, etc.

Sean Griffin has been named Volunteer Coordinator of WMCB and will soon be contacting all active DJs to discuss their volunteer activities. Sean presently produces "Listen 2 Griffin" on Tuesdays 4-6. Sean brings a lot of enthusiasm to the position and is looking forward  helping to move WMCB forward. According to Owen Weaver, Sean also does an amazing Patrick Swayze impersonation.
Posted by WMCB LPFM at 1:29 PM No comments:

Drew and Scott converse while Philippe and Jackie Rose work 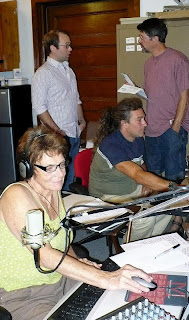 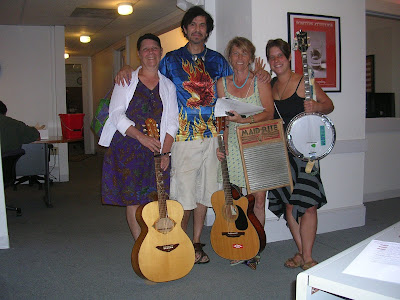 (In the picture, from left to right: Tina's Mom, Coyote, Jenny, Tina)

Up & coming musical duo Tina Collins & Jenny Bird made a guest appearance today on Coyote's WMCB show, "Hopi Visions". The two did an acoustic set and an interview on the show, which will be rebroadcast on Sunday, August 23rd, from 8PM to 10PM. Coyote says, "they are as wonderful a musical experience as one can have". The two were on to promote their concert in Greenfield this Thursday, August 20th, at 7PM at Unity Pioneer Valley. For more information check out www.jennybird.com Some of our DJ's have relinquished their time slots to pursue more immediate life issues... we wish them well!

Please peruse the new schedule to see what time changes, additions and deletions have been made...

NOTE: Dubwise Or Otherwise has taken the Saturday late night rebroadcast slot as an "anchor"... since it is pre-produced and since our hours will be extended in the near future, that tuesday (6 - 8PM) slot will become available. When that happens the sdaturday time slot for rebroadcast will be it's main airing.